GETTING CREATIVE ON TUESDAYS 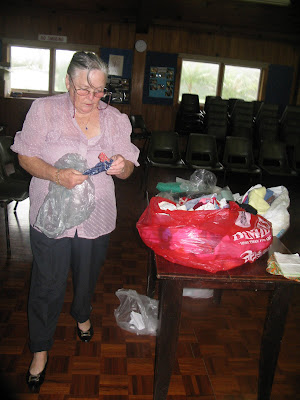 When Annette left for Australia recently, she left behind lots of goodies for the Craft group. Here is Lorraine going through some of the bags......
And here is what she brought one week later, a table mat made from some of the skinniest scraps! 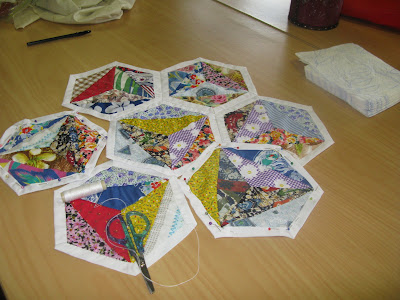 Loraine is definitely our most prolific and productive members.  In just one week she produced this piece from some 2" squares I had given her a week before. 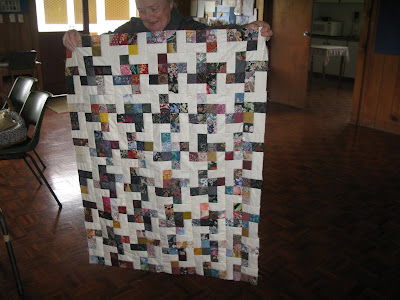 And this wonderful top was also made in double quick time from more of Annette's scraps! 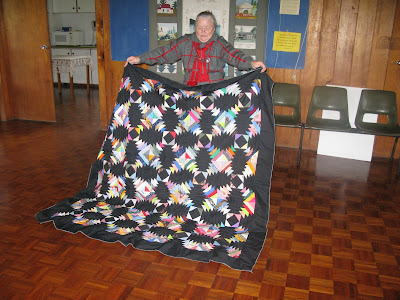 We all admired it, and wished we had some of Lorraine's focus and energy. 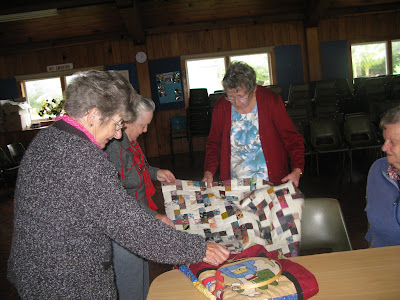 For two weeks, former group member End came to visit us, while holidaying on the island and visiting her son. Enid says she does not do a great deal of sewing anymore, but she enjoyed browsing through our stack of Craft magazines and chatting with us. 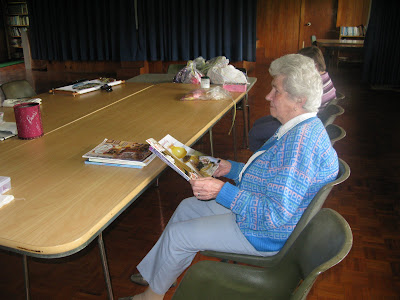 Agnes had a chance to go through some of my ENORMOUS collection of stranded threads, finding the right colours for an embroidery project. 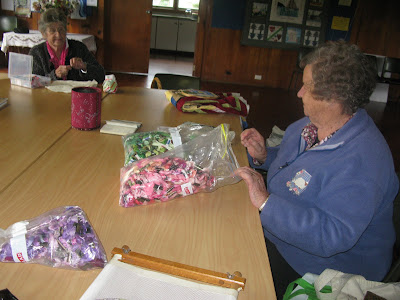 Here is the longstitch that Shirley is currently working on. 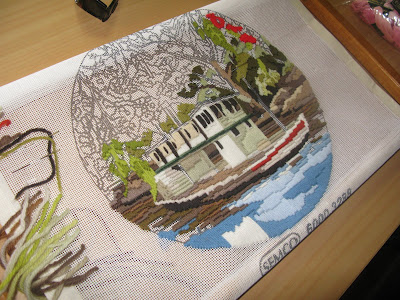 Joy has been making these wonderful "bedrunners" for a year or two now. This lady has the most wonderful colour sense - the brighter and richer the better! 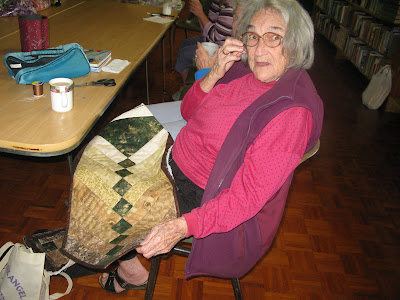 Connie has just re-joined the group after many years absence. It is so good to have her back! 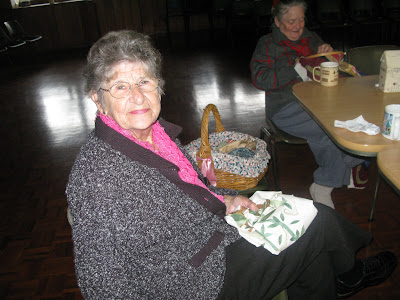 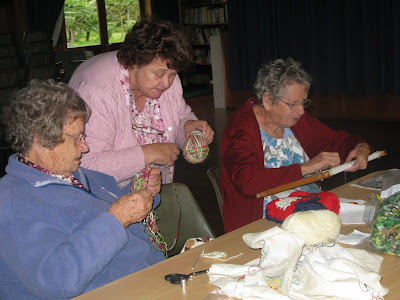 Joy and Enid both engrossed! 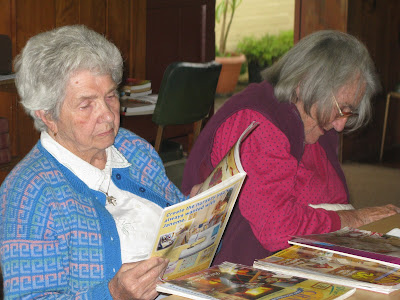 Believe it or note I am also working on an embroidered  linen tablecloth which I "acquired" recently. It is not really my thing, but I will persevere...check back on this one in a couple of years! 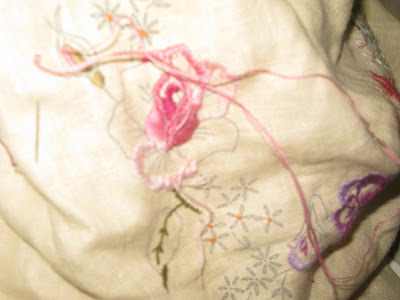 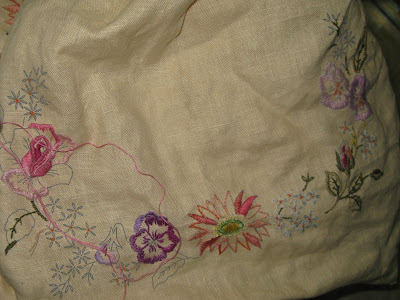 Andrea sometimes finds her ricepaper decoupage a bit tedious - so she has relieved the boredom and posed for the camera by wearing it as a hat. 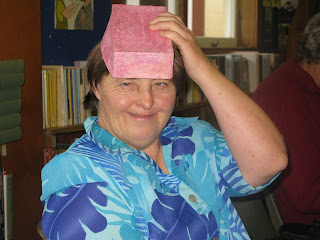 Andrea always does the washing up of the coffee cups - and if any of us try to help, we are told to get out of her kitchen! 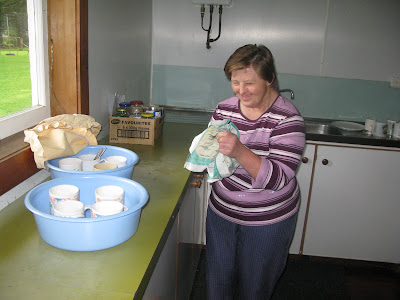 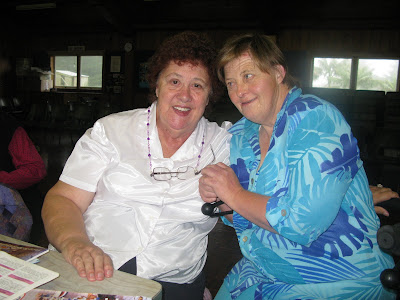 ﻿
Helen and Andrea share a special moment.
This is a lovely Craft group. We have been meeting for about 17 years, and our Tuesday "time-out" is very important to us. Acceptance and support and encouragement are so important to all of us.
Posted by Mary on Norfolk Island at 3:49 pm 1 comment: 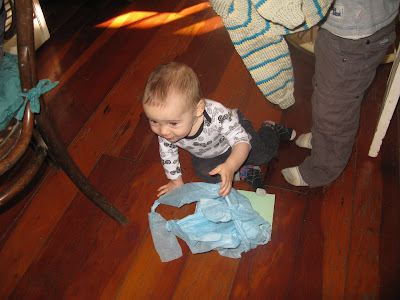 It was our younger grandson Nathaniel's (Nate) first birthday earlier this month, and this is the only picture that Blogger will let me upload today.
Up in the top right corner you can see the knitted wool jumper I gave him, while Nate takes more interest in the wrapping paper!.
I asked a friend Betty to knit this for me many months ago, when we really had no idea how big Nate would be at 12 months. It only just fits him! I hope Blogger will now let me upload a picture of him wearing it!
Hurray, I have managed another picture. I am not going to risk the frustration of trying to post another one today - I will perhaps add more pictures when Blogger has got over its hissy fit. 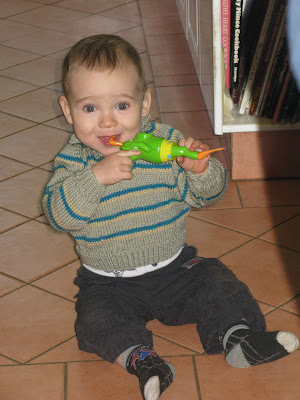 I think you will agree he is a great little fellow, very easy going and always smiling. In fact he definitely has his Dad's sense of humour! And the jumper looks great. Granny's choice of colours.
Betty left the island not long afyter she finished the jumper, so I am going to have to find her address so she can see it on Nate!
Posted by Mary on Norfolk Island at 3:14 pm No comments:

The other day, I went looking for a quilt top I had made some years ago, thinking I might make an effort to turn it into a proper quilt. I did not find it, but I did come across a number of other UFO's (unfinished objects) and WISPS (works in slow progress.) Among them were a couple of crazypatch squares that I had intended for some cushion covers for the lounge.
So off I went to some of my upholstery fabric stash (I am gradually working through it). In two up's I had two new cushions. Made me wonder why I had left it so long! 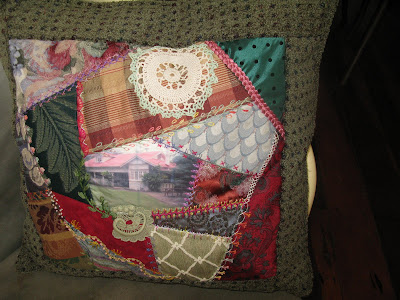 The centrepiece for each of the cushions is a silk print that I made from photos of the front of Devon House. 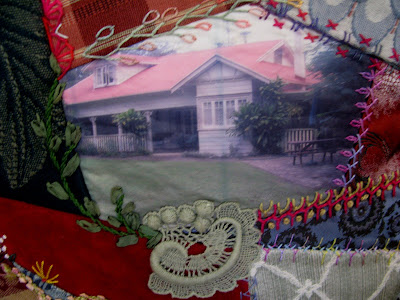 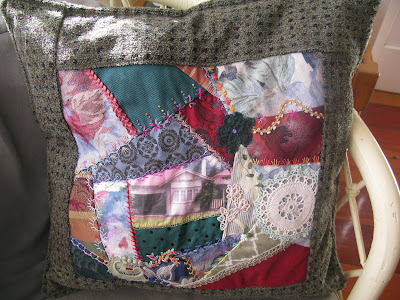 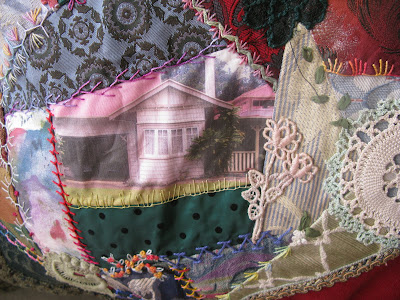 I also found a leftover square from my fruit and vegetable CQ quilt, so that became a cushion too, using some leftover fabric from the upholstery fabric in our window seat. 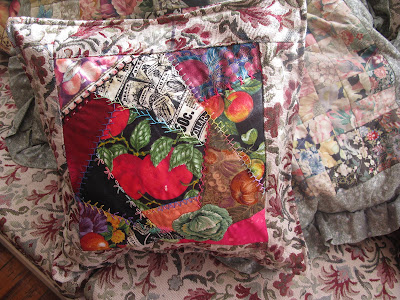 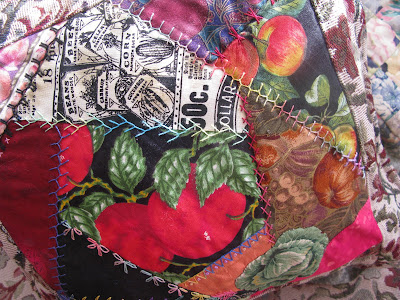 It complements the quilt really well. 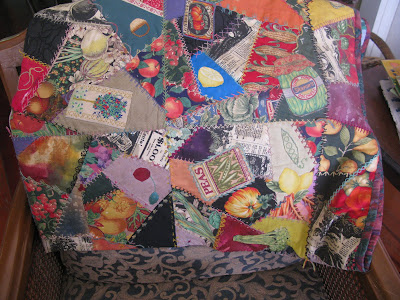 We tend to be a bit on the "safe" side when it comes to decorating, and our paint finishes are extremely neutral for the most part. So I am glad I can add this colour to the home through my creative crafts!!! 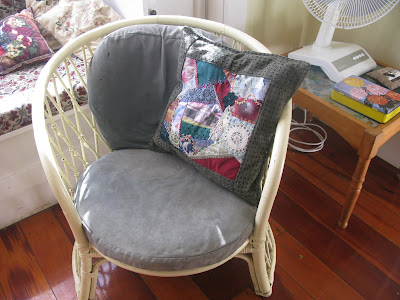 Posted by Mary on Norfolk Island at 12:00 pm No comments:

I will have to apologise for the quality of the photos in this posting. I really don't know what all those numbers on the dials of my digital camera mean, and I really ought to find out how to get the best out of my camera. The booklet that came with it was definitely not very user friendly.
But it was a great party!!! I mean Don's 60th! Held last Saturday night at his wonderful "shed."


We all had to come dressed as a queen or princess - but a king or prince would do at a stretch.


I made gold crowns for Bernie and myself and decorated them with plastic jewels that I have had lying around for yonks.
Connie's tiara was repeated everywhere - the Toy shop had a big supply, obviously. Sorry the pic is so fuzzy - she looked great in the red velvet dress!
Les's dress really showed off his figure!
While a jewel encrusted toilet seat really fitted the Tudor style for Gaelene.
Mudgi borrowed Peter's Pearly King outfit.
We all brought food to put on the table, to go with the fish and chips that were being cooked outside.

Clare looked truly royal.
Don's cake was in the shape of a guitar - very appropriate for this very musical fellow!
After the meal there was some impromptu entertainment
It was all too much for Princess Mauatua, who is being watched over by big sister Princess Mikaela.


We have known Don for a long time. I first met him when he was 18, but Bernie has known Don and his family for much longer than that. He is a great friend, the best-natured person you could ever hope to meet.
.
Posted by Mary on Norfolk Island at 3:23 pm No comments:

The other day, Bernie and I went down to Kingston to have some morning tea in the  REO cafe, which is situated in the Royal Engineers' Cottage in the Penal Settlement area.
While there we took the opportunity to view the exhibition pf artwork on Tapa cloth by Meralda Warren from Pitcairn Island. Meralda is a proud and energetic Pitcairn Islander who has devoted much of her life to promoting and preserving the culture and the skills of her people and her island. She has been an inspiration to many Norfolk Islanders and has encouraged them to value their traditional culture and skills.
Meralda has worked with traditional woodcarving, and has produced a Pitcairn Island cookery book. In recent years, however, she has felt a strong responsibility to revive and teach the art of making tapa cloth.
There was a time when tapa cloth was the main form of textile in Polynesia, and was made for both bedding and clothing. Tapa is made by pounding the bark from trees such as the Pacific mulberry. It is a slow and tedious process.
The practice of making the cloth was discouraged for a period of time by the missionaries, but Meralda has decided to revive it and teach it. At the same time she is taking it to new levels by making artwork using inks/dyes that she has produced from local plants, and even from smoke.
Meralda's pictures tell the traditional stories of Pitcairn Island, including the unique beginnings of the community after the Mutiny on the Bounty.

Included in the exhibition were some tapa pictures that have been made by some of the younger generation on Pitcairn Island, under Meralda's guidance.

This information gives some background to Meralda's work.

We really enjoyed our morning at the REO cafe, in this beautiful little Georgian buiding with its very special architectural features.


When I came home I scrolled through some of my photos and found this one, given to me by our friend Pauline, of Meralda  giving Mauatua (Pauline's daughter) some early lessons in beating out the cloth. This picture was taken in Tahiti.
And here is a piece of tapa cloth made by Pauline using bark from the Pacific Banyan.

Posted by Mary on Norfolk Island at 4:55 pm 2 comments: