From time to time I find myself thinking about a particular subject, and tracing all the associations back through my life. This week I found myself doing that with violets. It all started when we were cleaning out one of the sheds down the back - but more of that later!!

Violet was my mother's middle name, so I suppose the word came up fairly frequently in a teasing sense in our home. I think she would rather have been called "Rose" like her younger sister! I wonder why Violet has always been treated in a more comical fashion than Rose - they are both beautiful flowers! I had a cat called Violet a few years back, and I must confess I chose the name more as a joke. She was rather an ugly and misshapen  creature- but she had the most beautiful nature. She disappeared quite suddenly one day, and I still feel a deep sadness and lack of closure about her disappearance.

Now when I was about six, back in England, my mother told me one morning that I would not be going to school. Instead, she and I were going for a picnic. We packed some food, and caught a bus somewhere - I think it was a place called Sidcup. We picnicked in what I remember as a woodland park area. When it was time to come home, we waited for the bus outside a shop. In the window, there was a pot of violets. I asked my mother if I could buy them for her. We returned home with our violets and Mum planted them in a little garden area outside the French doors at the rear of our house.
Whever we picked a bunch of violets we used to put them in a little glass vase like the one below.

I still have a vase this size and shape, and would never consider putting anything but violets in it!
When we migrated to Australia, we lived for a time with about 20 other families in a migrant hostel in Kyeemagh, right where the Sydney International Air Terminal is now. The children at the hostel decided to stage a concert for the grown-ups. I offered to go on the program and sing a song I had learned at school called "Peeping Violets." My mother made me an outfit from mauve and purple crepe paper. I was seven or eight at the time.
I don't know if we had any accompaniment, but when it was my turn to sing, I must have started on too high a note, and halfway through the song I couldn't get my voice high enough to finish! I ran off in great embarrassment.
However, practising that song must have imprinted it on my mind, because I still sing it to myself from time to time. Many years later, when Bernie's great-aunt died, I was delighted to find that song in a book that was among her great collection of music! 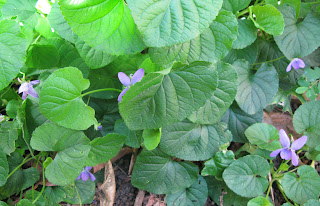 I still have a little patch of violets in a corner of the garden, and am always delighted when they come into bloom in spring.
I had a fling with African Violets for a few years, and used to propagate them for friends and for Church Fetes. However they lack the whimsical delicacy of the woodland violets, and I now only have one pot, which has defied my neglect over the years. 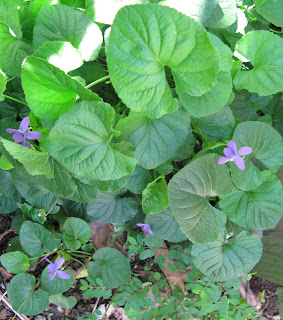 A few years ago I purchased a beautiful fabric featuring violets, and have loved using it in various ways. 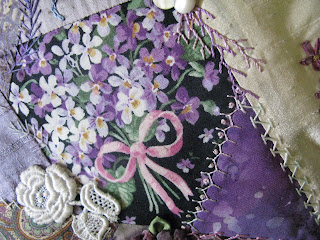 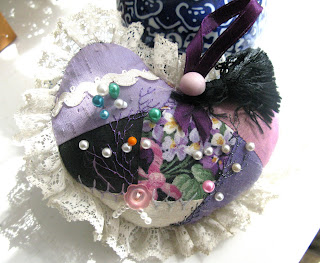 There is another special memory associated with violets, dating back to my late teens. I was in the city (Sydney) one Saturday morning, and passed the flower sellers in Martin Place. I suppose it at a time when I had a little bit of disposable income for the first time in my life, and I purchased a little bunch of violets "just because.." I was actually on my way to a meeting in another suburb, and I needed to ask the owner of the house where we met to put my violets in water for me. Why do I recall all this? Well, it was that afternoon that I met my first boyfriend! 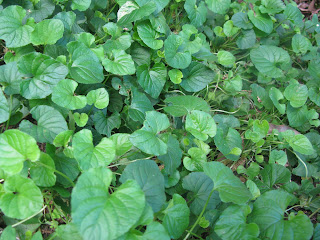 This brings me back to the shed cleaning last week. I had been searching for that "Peeping Violets' music for a couple of years, because I just could not remember some of the words anymore.
At the back of the shed we found a collection of song and music books that I used to use for teaching, including Sunday school and scripture. There were these lovely old Carey Bonner books, one of which had my "Violets" song. 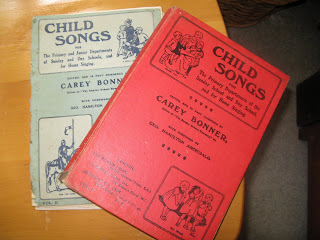 I felt I had been reunited with an old friend! 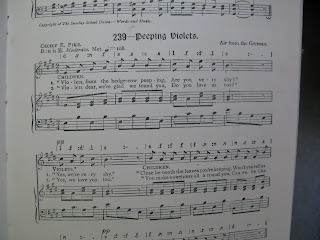 And here are the words of my "Peeping Violets" song, which was written by Cecily Pike, with the music described as an "Air from the German":


(Children)Violets from the hedgerow peeping
Are you very shy?
(Flowers)      Yes, we're very shy﻿
(Children) Close beneath the leaves you're keeping
Won't you tell us why?
(Flowers) We are only tiny flowers
So to hide we try
Violets dear, we're glad we found you
Do you love us too?
Yes, we love you too.
You make sweetness all around you,
Can we be like you?
Always try to think of others
That is all we do.
Posted by Mary on Norfolk Island at 9:48 am 1 comment:

They say you cannot teach an old dog new tricks, but I am determined to prove them wrong.
I have been trying out some techniques that I really have not used since I was about five years of age. I can remember sitting in our classroom in our Little Danson Park school back in England during "activity time." I loved to choose the sewing activity. We were provided with a basket of felt pieces, big darning needles, wool, and - I suppose - there were scissors, which must have been reasonably sharp to cut the rather thick felt. We were allowed to make what we liked, with what were probably rather coarse stitches. There was no worry about neat seams!
Well, I have to tell you that I am once again embarking on a journey where I will embrace raw edges!! 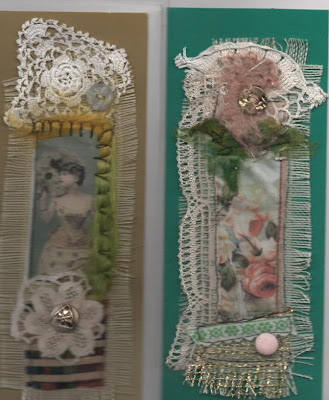 I have not worked with raw edges since my first real sewing lesson, in Year 3, where creativity went out the window, and neat stitches and tidy seams became the order of the day. I will confess that I was not so very good at sewing in the practical areas in Primary schools, and used to make up for it by "swatting" up the theory of things like the 5 main groups of fibres, and terms like warp and weft.
It really is a wonder that I eventually learned to love fabrics and threads, and made them my chosen form of creative expression after an early love affair with painting.
Now I am definitely not an anal person, but I do believe that my creations should show good workmanship and stand up to wear and tear. Leaving raw edges exposed does not come easily to me, but I have told myself that it really doesn't matter if the raw edges are at the back or the front of a piece - they still have to stand up to wear and tear!
For my first foray into this new freedom, I have been producung some collaged cards. 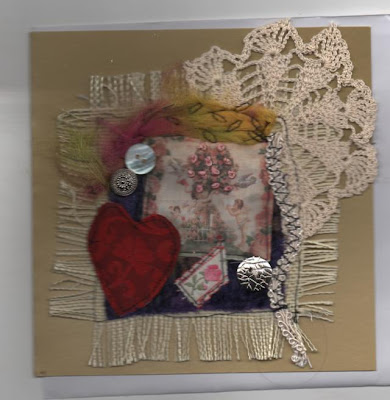 Now I know why pre-schoolers have such fun gluing on bits and pieces of "this and that" in random fashion. This first effort was such fun - although the only actual glue I used was the doublesided tape to adhere the collage to the card. I decided to use black thread in my sewing machine. No point in trying to disguise the stitching - you may as well go the whole hog and make the stitching honestly obvious.

I was recently given quantities of embroiderers' linen, which made an ideal background. I fringed the pieces. Come to think of it, fringeing was the nearest thing we ever came to raw edges in our formal sewing lessons! 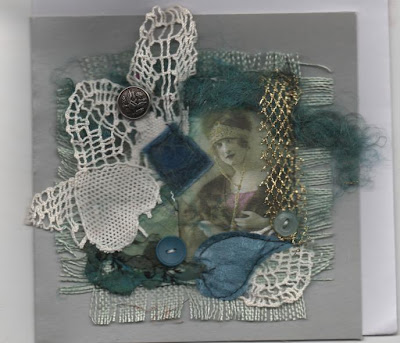 Then I went to town with bits and pieces of all sorts of things - vintage images printed out on the computer, scraps and snippets of interesting fabrics and silk paper, buttons, braids, silk fibres, and - of course - bits of lace 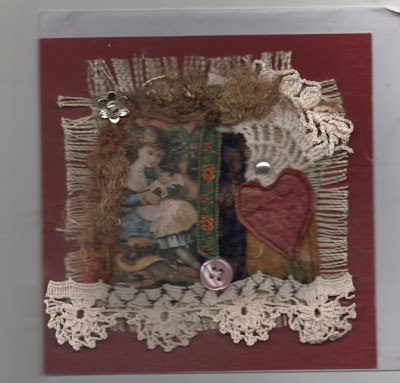 The first one I made had a big red heart

﻿And I knew I was going to be tempted tp put a big red heart into all my future efforts - a temptation I only partially resisted. What's wrong with big red hearts, anyway?? 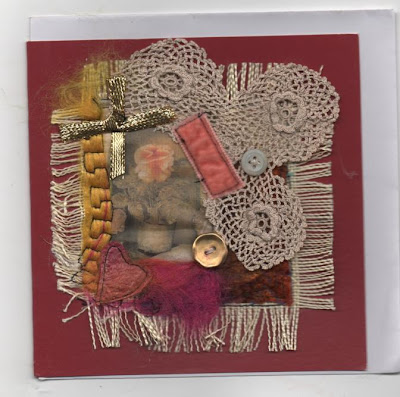 I had a supply of suitable cards on hand, purchased at a good price from a Jumble sale stall two or three years ago, from someone whose cardmaking phase had passed.﻿
Now I probably have enough "bits and pieces of this and that" to enable me to ptoduce several thousand of these cards without running out of anything except cardstock.
I suppose it is because cards are somewhat ephemeral in their nature that gave me courage to to get rough and raw with them. But hopefully some of the recipients would like them enough to keep them out of the garbage bin for a little while, anyway.
I have yet to "test the market" with this style. But meanwhile I have plans to try out the raw edges on a little fabric book, where I can just take sheer delight in the fabrics and threads and embellishments themselves, without having to worry about tucking all the hanging bits out of the way!! 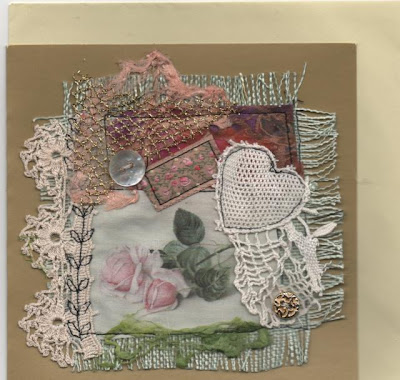 Posted by Mary on Norfolk Island at 1:48 pm 2 comments: