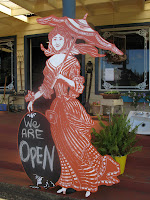 For some time now, I would have to acknowledge that normal shopping...once a favourite pastime...has lost much of its appeal. It takes real stamina, not to mention funds that are needed elsewhere!
However, there is still one kind of shop to which I am drawn like a magnet, and that is a secondhand shop. It may be an Op Shop, a Junk Shop, an Antique shop, even a Rummage or Garage Sale, but I will be there if the opportunity arises! 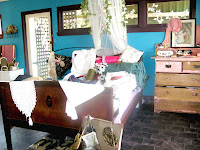 I was delighted when I learnt that Linda Chapman was opening "Collectors' Corner" down in the old Smithy's building at the other end of town. Linda operated another secondhand shop here some years ago, before going away with her family to West Australia for a few years. Ever since they came home, I know she has been chomping at the bit to get started again.
The Smithy's building is iconic in itself. Many of us remember it as the old Milk Bar some decades ago, and since then has been occupied by many different businesses, even a church for a time.
Now it is a most delightful place to visit, with several different rooms, nooks and alcoves for the collector to explore at his or her leisure. There is a "Hard Hat" room, with items of special interest for the menfolk, a room devoted to kitchen and culinary items, and areas with childrens' stuff.
Some of the pieces, including some of the furniture, are not actually for sale, as Linda and Richard are not ready to part with them...but they do add to the ambience of the place, and are used for displaying many of the goods that are for sale!

For those who like to linger, free tea and coffee are provided. You are also invited to browse through Linda's wonderful collection of books about antiques. Hopefully, you may just discover that you have something very valuable and desirable at the back of the cupboard at home! 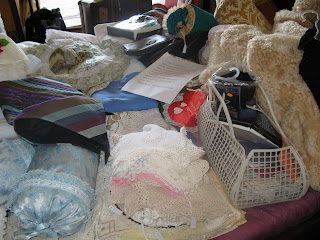 My special interest, of course, is textiles, and I was able to pick up some lovely old handworked doileys and a couple of interesting fabric pieces. I also picked up another really interesting item that I will tell you about in another blog! 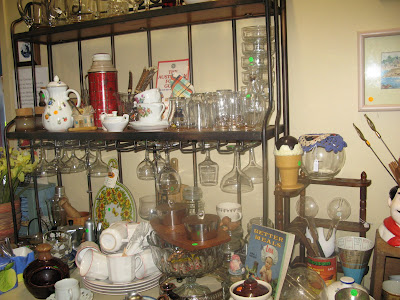 Posted by Mary on Norfolk Island at 4:22 pm 1 comment: 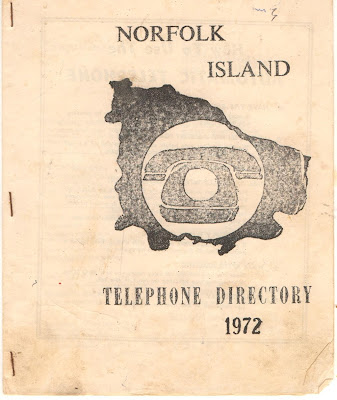 Yesterday, when I was going through some old historical papers, I came across a Norfolk Island phone book for 1972.

I should tell you that in some respects,the 20th century came about 50 years late to Norfolk Island. When I first came in 1966, there were only a handful of party line phones on the island, most connected to the Administration, or people running essential services, and a few of the larger businesses. Even in 1970, when we first married, and I moved into Fletcher Christian, our number was "Four longs."

It was shortly after this that an automatic phone system was finally installed, and many of the locals vowed that they had no need of this modern technology.

In 1972, the Norfolk phone book consisted of just 3 folded foolscap pages.....six pages in all, with the back page inside and out being blank. Just four 1/2 pages are dedicated to the list of ordinary subscribers, and very few of these are people who had a phone just for personal domestic use! There is a whole page devoted to "How to Use the Automatic Telephone", with basic instructions like "Keep the receiver off while dialling" Come to think of it, real dialling is a thing of the past now! 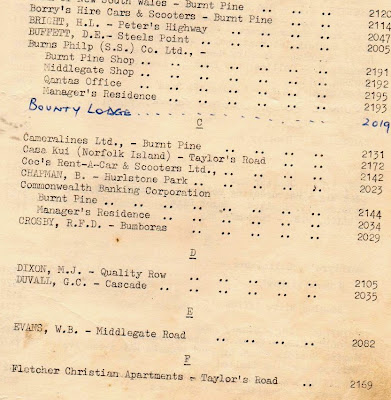 Just a few years later, the local phone book had grown considerably in size. The old timers had put aside nostalgia for the days when news and messages were relayed by voice across the valleys. With a growing tourist industry, the pace of life had grown faster, and the telephone had become a convenient replacement for the leisurely visiting that had been the norm in earlier days.

There was resistance to the introduction of overseas calls in the later 70's. Cables (delivered by motor bike), and the new-fangled "telexes" were, we felt, sufficient to keep us in touch. I can even recall an Administrator of the time rejoicing in the fact that he could not be contacted by Canberra in a hurry!

The first overseas calls were operator assisted, and in many ways our exchange operators became very important in our lives. They were most obliging, even passing on messages or trying other numbers when someone was not answering their phone at the time. It was quaint, but typified the friendly old Norfolk ways.

Finally we got automatic ISD, and I remember the system having its official "opening" at a function at the South Pacific Hotel. It was a local hairdresser, known as "Susie Boobs" who had the honour of dialling the first call. Actually, the system had unofficially been in place a few days before, and a few lucky people had discovered this and jumped the gun to make calls to family and friends.

Well, we now have the Internet in a large percentage of Norfolk homes, and many people are taking advantage of the "Skype" technology to make very cheap calls using their computers. At around 3 cents a minute, it is a great improvement on the $1.50 per minute through Norfolk Telecom!

Within the next week or two, we will finally have mobile phones on Norfolk Island. We will get one...we even know what our number will be!

Mobile phones represent the collapse of just about the last barrier of resistance for Norfolk Island to being just like the rest of the world. Most of us are little sad, many are devastated. I suspect that in a year or two, the opposition will be a faded memory, just like it was in the 70's, when we embraced automatic telephones, and learned to enjoy the advantages of being able to keep in touch with one another.
By the way, the 2005-6 phone book has 76 pages in the White pages and 58 in the Yellow Pages. We have come a long way!
Posted by Mary on Norfolk Island at 10:58 am No comments: 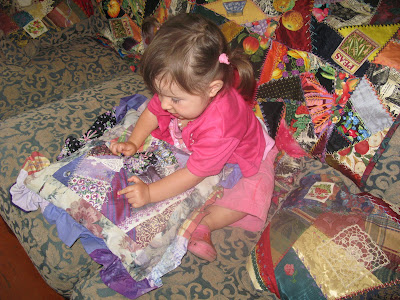 Sienna, together with her brother Teddy, and her Mum and Dad, have been living with us for about 7 weeks, waiting to move into their new abode at Fletcher Christian.
In that time, we have seen her emerge from a baby to a little girl, albeit a mischievous toddler, full of fun.
At 16 months, Sienna is ready to explore the world around her, and that includes the contents of boxes, cupboards and drawers!
But I have been delighted to find her, in the odd quiet moment, examining some of my Crazy patchwork. She sits and runs her fingers along the embroidered seams, twiddles and feels the buttons and beads, and oohs and aahs at the shiny bits and pictures of things she recognises, such as the lacy crinoline lady.
Now, this is just what Crazy patchwork was intended for....to give sensory visual and tactile pleasure, and Sienna is a most appreciative afficionado!! 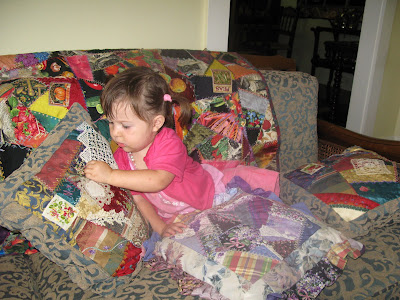 We often think we would be lost without our eye sight, but can you even began to imagine a world where you cannot touch and feel with your fingertips? 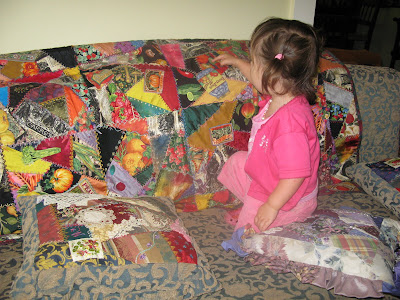 Posted by Mary on Norfolk Island at 5:38 pm No comments: