For many years now I have belonged to an online group dedicated to Crazy Quilting. The members are mainly from Austrtalia and New Zealand. We get to know each other quite well, even though we live far apart. About 8 1/2 years, we had a big Retreat in Canberra with about 70 members attending, most meeting each other for the first time. A year or two later there was another Retreat in Nowra, although I did not get to attend that one.
There were some rumblings about having another get-together, and I dropped broad hints about Norfolk Island being thr ideal spot for a Trans Tasman get-together, After months of planning, it has now happened. There were only five of us, but we have had enormous fun! 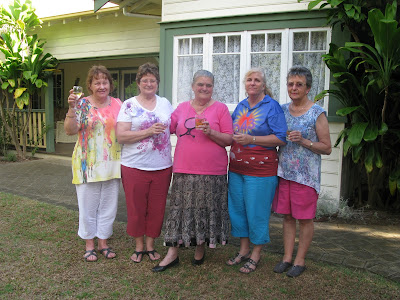 Here we are on our front lawn. From left to right you have Alison, from Ayr in Queensland, Faye (from near Coff's Harbour in N.S.W., me, Arlene from Townsville, and Joy from Napier in NZ. 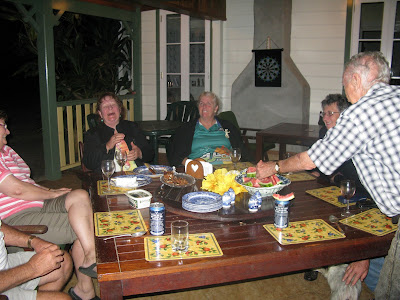 The night when most arrived, we had a get-together meal, including husbands of course. 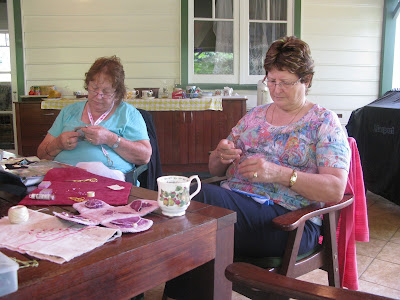 The next day we gathered round the same table for the more "serious" business of stitching. Husbands were set free to amuse themselves as they wished, although they called in for a sandwich at lunchtime. 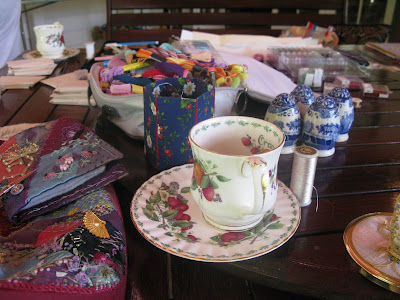 Now this is a typical Crazy's table - loads of sewing bits and pieces, and the very necessary coffee to sustain us! 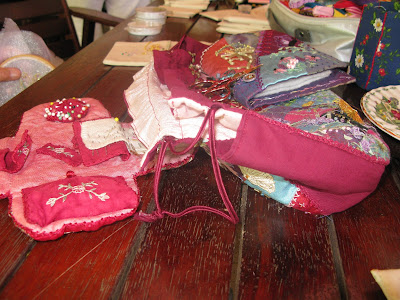 Ouyr first project was this very beautiful stumpwork beetle, with Arlene as our very patient and encouraging teacher. 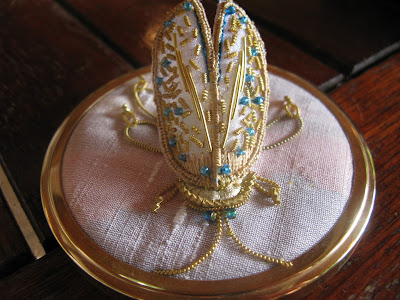 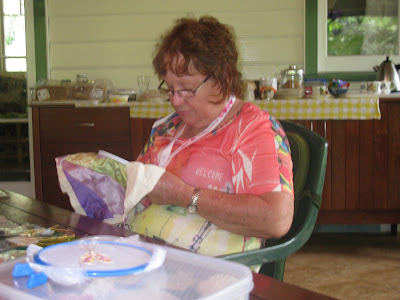 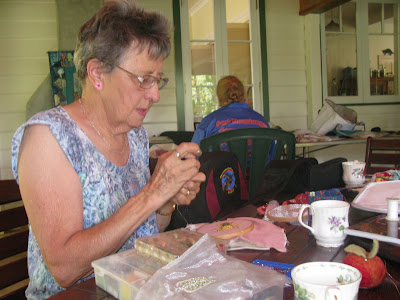 But there were plenty of laughs too! 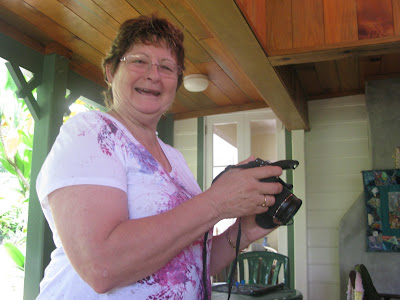 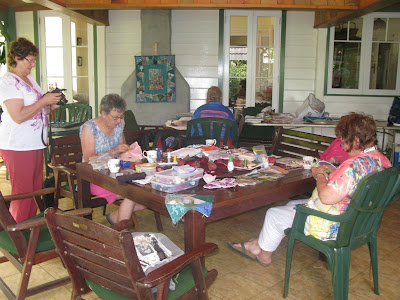 Arlene took time off to check in with things back home.... 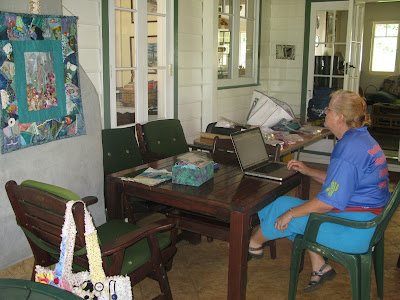 There was lots of show and tell... 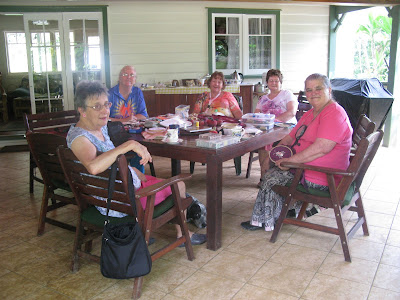 Here is my finished beetle. I called it a Cockroach in drag - or "bling"! I cannot believe I actually managed to finish anything so fiddly, but I was really pleased with myself. Arlene was a great teacher. 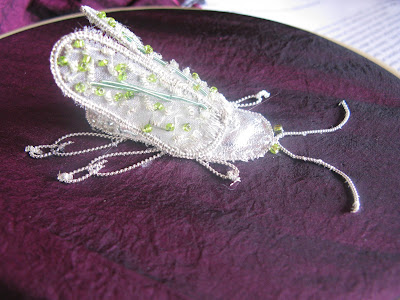 Faye showed us how to make a beaded cabochon. I had less success with this, because it involved counting and I kept getting lost. So I called it quits, and promised to bury my mistakes in lace and ribbon. 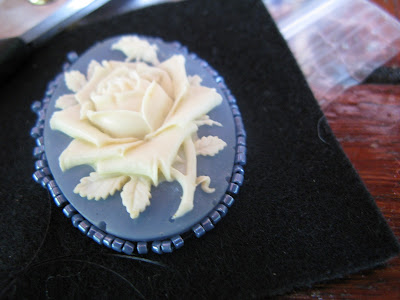 My daughter in law Kim came up and suggested we all needed a white wine. 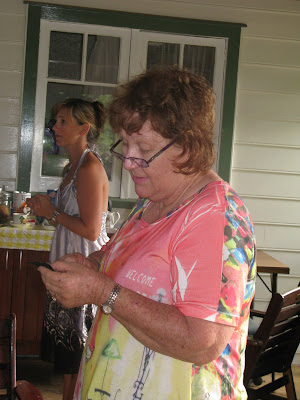 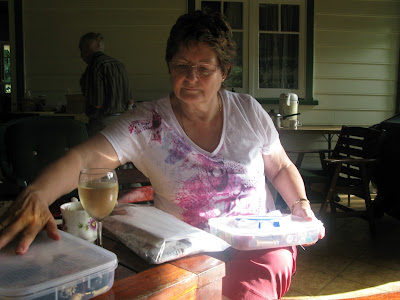 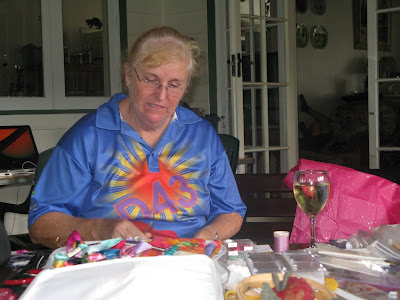 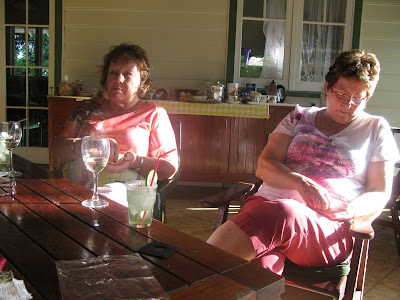 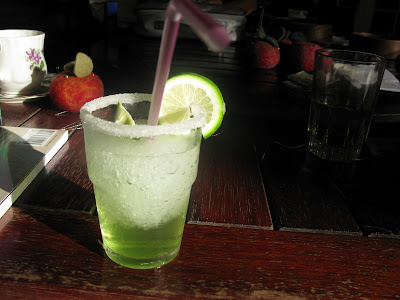 But then she suggested a Vodka and lime cocktail - which was just wonderful Thanks so much Kim!!
I think Joy was really feeling it was all "naughty but nice!" 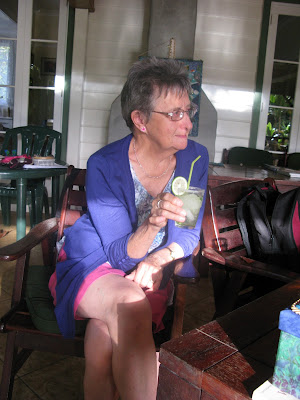 On the fourth day we had a chicken scratch, which was great fun. This is where you dive into a pile of fabrics etc and snip off bits to take home. I am sorry I did not get pictures of that, but Faye posted some on the Southerncrosscrazies website. We also went on a shopping expedition, and found all sorts of goodies in the local shops for our hobby! 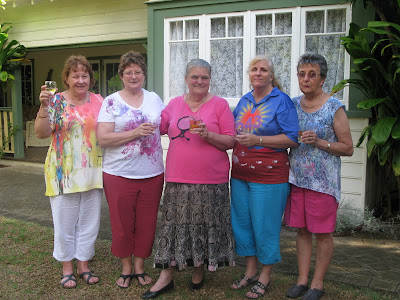 Joy returned to Kiwi this morning. Arlene and Michael, and Alison and Terry head back to Queensland on Tuesday, and Faye and Ray are going to relax here for another week.
It has all been really great, and we have had lots of laughs, swapped lots of ideas and stories, and alll agree we just love the Internet, which has brought us together!!!
Posted by Mary on Norfolk Island at 5:06 pm 3 comments:

I do not seem to have posted regularly of late, and I am not sure why. That is, apart from the fact that at my age,I have probably already said and done most things I want to say and do, so it is sometimes hard to come up with something fresh which will not bore you!!
Tina, who also finds it hard to get to her blogs regularly, suggests we should try making them shorter, and perhaps just try to feature one good photo each week. She may be on the right track there, and I admit my blogs have been rather labour-intensive productions in recent years - although I really enjoy writing them once I get going.
So I thought I would start with this lovely shot emailed to me by Lou during the week. 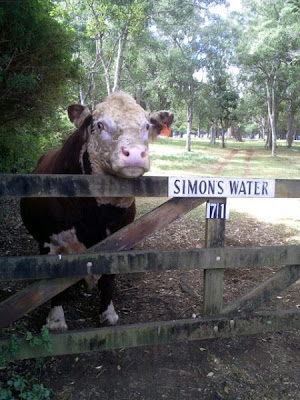 Don't you love him? This is our bull, looking over the gate at Simon's Water. Lou saw him when she was driving past, and couldn't resist it! Actually it is Speed's bull. Our fellow "Handsome" is out at New Farm Road giving Speed's girls a change of partner, while his magnificent specimen ( we call him "Speedo")is giving our girls a thrill. They are both Poll Herefords, which is a great breed for Norfolk Island. 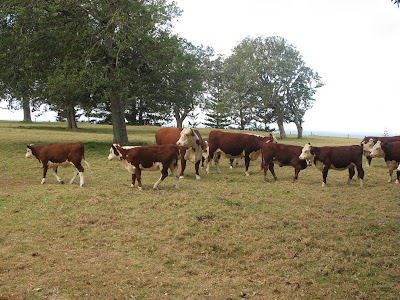 But from the look of him, he has spotted some more "talent" in a paddock over the road, and has decided the grass is definitely greener on the other side!

Now I knew I could not confine myself to just one picture.......
Here is a "fabric page" I made for one of the girls in our Fibre Fever Round Robin. Annet wanted pages with a "Fantasy" theme, so I chose a Fairy theme. 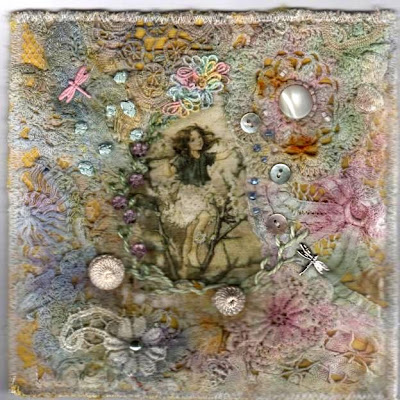 The page has been done with collaged and hand-painted lace, embellished with embroidery, tatting, buttons and beads and other doodads. It is 6 inches square. It was posted off to The Netherlands and arrived in under a week. That is what happens when you have fairy wings helping you!
Below is another little fairy cushion, one of three I made some years ago. 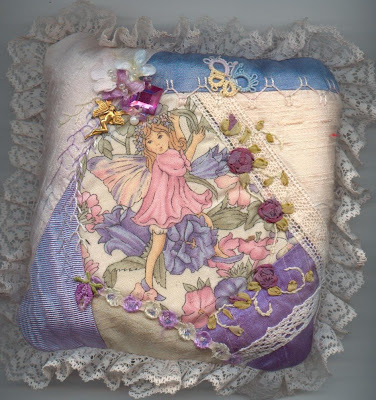 And another larger one, using the lace collage technique... 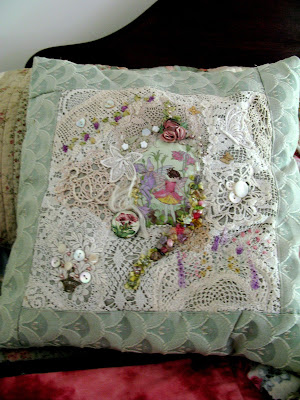 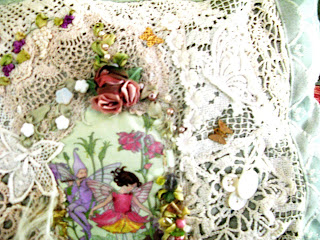 Sorry, the light is not very good in this one, but you get the idea.... 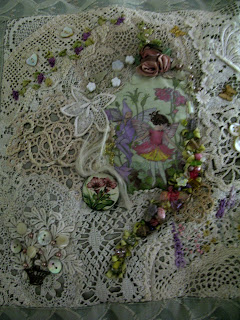 I will tell you something funny. I really thought I had "invented" this lace collage technique. because I had never seen anything quite like it. But I have since learned that there is a lace called "Normandy Lace" where small pieces of special and precious lace are pieced together into a larger piece. I guess my technique comes close to that. 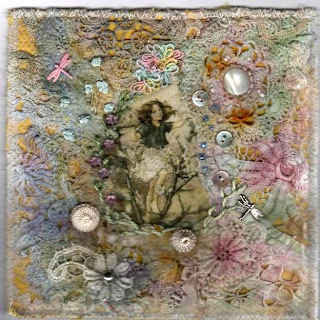 Posted by Mary on Norfolk Island at 2:53 pm 2 comments: