A HISTORICAL LOOK AT FOUNDATION DAY
A Foundation Day is generally understood to mean a day in which people celebrate the settlement of the place where they live. There was a time when January 26th was known as Foundation Day because that is when Governor Phillip established the First Settlement in Sydney Cove. West Australia has celebrated a Foundation Day since 1834 (now known as “West Australia Day”.). It was introduced as a way of uniting the settlers of the area after it had been created as a colony five years before.

It is not absolutely certain when Norfolk Island first celebrated Foundation Day. But we do know from “The Norfolk Island Gazette” dated 4th March 1938, the people were being encouraged to organise special celebrations to mark the 150th anniversary of the founding of the first settlement in March 1788. It would appear that the day was being promoted from the Administrator’s office, and special notices were issued by Mr E.Stopp, the Official Secretary. The Gazette notice reminded the Norfolk people that while they were accustomed to celebrate June 8th as the beginning of their settlement on Norfolk Island, that “it is fitting that we should remember the date on which Norfolk Island was actually occupied as a British Settlement.” 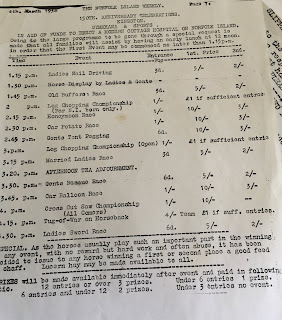 The actual day, March 6. fell on a Sunday that year. There was a special church service at All Saints’ Church for all denominations. The offertory from this service was to be directed to a fund for the building of a new hospital.
Around that time, the Church of England had just come under the Diocese of Sydney. The Archbishop Dr Moull arranged for a special commemorative service to be held at St Andrews Church in Summer Hill in Sydney, and for his sermon to be broadcast on Radio 2CH, and another special message from the Archbishop to be broadcast on 2BL a little later in the day. Fancy the Norfolk celebration attracting such widespread attention. 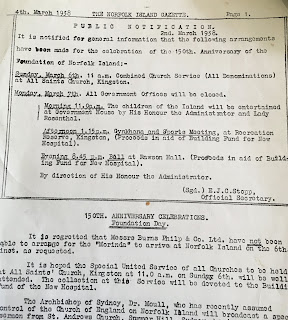 The Gazette announced that on Monday 7th, all government offices would be closed, because it would be a Public Holiday. On the Monday a special Sports Day and Gymkhana was planned to take place “at the Recreation Reserve” at Kingston. The arrangements for this were in the hands of Mr H.R. LeClerc.

The Sports Programme reveals some fascinating events. It is funny how cars, which had only been on the island for a few years, had their own events in the Gymkhana! There was a Car Potato Race and a Car Balloon Race, Ladies Nail Driving, an Old Buffers Race, a Cross-cut Saw Championship, and a Tug-of-War on horseback. Other events included a Ladies Sword Race, a Married Ladies Race, Tent Pegging, a Gents Rescue Race, a Honeymoon Race, and Log Chopping Championships. Chaff was provided for the horses, and people were asked to keep their dogs at home, or at least chained to their sulkies. Any entry fee money was to go to the hospital fund after prizes were distributed.

In the evening, a Ball was organised by the Ladies’ Hospital Guild. Believe it or not, the Ball did not commence until 8:45 p.m. Perhaps no one had time to get their chores done and get into their “gladrags” any earlier!  All Returned Soldiers were requested to wear any medals and decorations. Once again, the Ball was intended to raise funds for “A Modern Cottage Hospital.”

The Cottage Hospital did not eventuate and continued in the Bishopscourt premises until the end of the War, when the new Military Hospital was handed over to the Community. Foundation Day remained a Public Holiday, but the strength of the celebrations varied. In the late 70’s, Alice Buffett sought to revive a level of community celebrations on the 6th March, which was also Alice’s birthday. Alice organised a number of events for young and old, and many of today’s adults have happy memories of those activities.

In 1988, the official celebrations for the BiCentenary were on a large scale. At Kingston Pier, there was a colourful re-enactment of the landing, followed by a big community picnic. 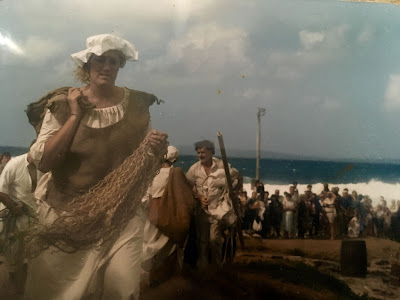 Everyone attempted to wear period costume. A large number of visitors from First Fleeters groups were there to join in the celebrations. That evening there was a big Ball in Rawson Hall. 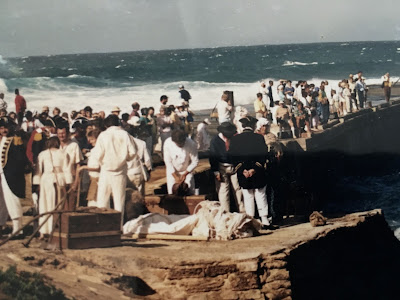 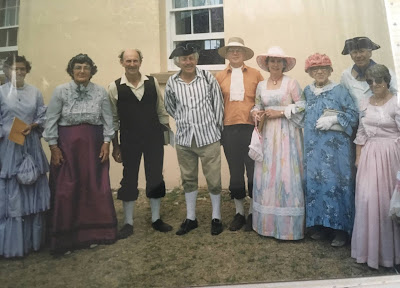 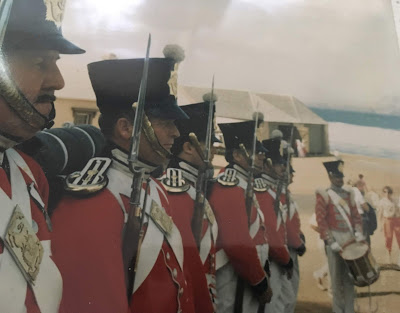 This set the pattern for the modern day celebrations. The re-enactment now takes place from Emily Bay. The local people are still conscious of the fact that it is more of a celebration of British settlement on the island, but is not connected to the Pitcairners’ story. Nevertheless, they are happy to contribute to what has become an important visitor experience, and to enjoy a “day off’ work while the warm weather still allows for picnics and swimming.
These pictures show the re-enactment/celebrations in the 1988 Bicentenary 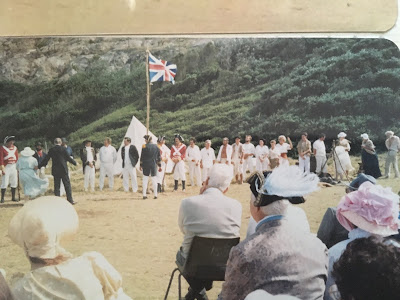 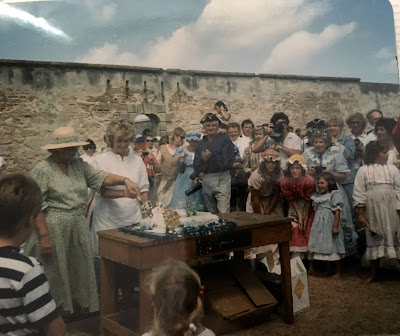 Posted by Mary on Norfolk Island at 4:40 pm