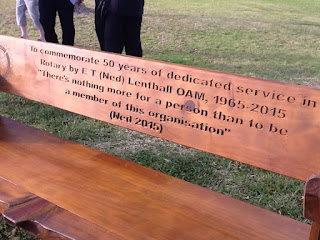 Last Saturday afternoon, in a reserve above Headstone, appropriately known as the “Half-Century Reserve”, Ned’s seat was officially unveiled. 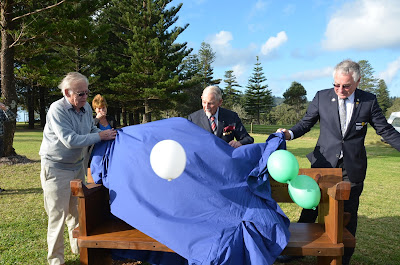 As the cover was removed, celebratory balloons were released out over the sea, and there was much excitement and taking of photos. The gathering included not only friends and local Rotarians, but a contingent of visiting Rotarians including the District Governor and a number of past District Governors. These are people who hold Ned in very high regard for the role he has played in Rotary and in the District to which Norfolk belongs.
The photo below shows Ned “testing out” his seat for comfort. 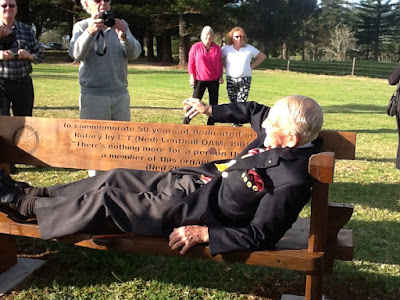 And this one shows three of the four remaining foundation members who are still active in the local club – Ned, Bill Blucher, and Bernie Christian-Bailey’'. 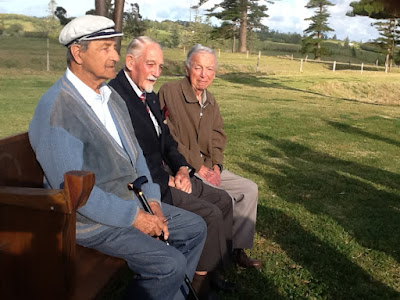 Ned’s initial experience in Rotary was with the St Ives Club in Sydney. After coming to live on Norfolk Island, he saw the possibilities of forming a local branch. Norfolk Island Rotary held its first meeting on February 16th, 1973, and had its official charter night later in June of that year. The official charter was sponsored jointly by the St Ives Club, and by the St Ives club in Auckland, which was part of the district to which the Norfolk Island Club had been assigned. Ned provided strong guidance to the club in those early years, and went on to fill the role of District Governor in 19 79(???) 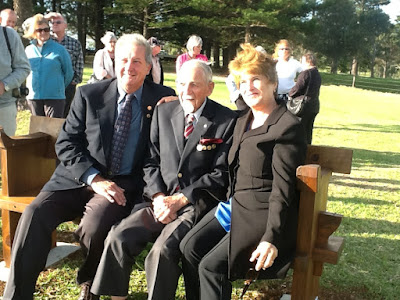 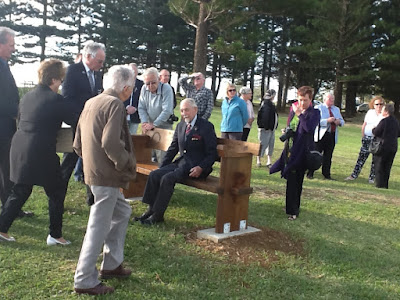 After the official ceremony of unveiling Ned’s seat, several of the group moved on to the Leagues Club for some fellowship and refreshments.
In the evening, a wonderful celebration dinner was held at Bounty Lodge.
During the dinner, several people spoke of Ned’s contribution and achievements over his lifetime. Special mention was made of the fact that during WW2, Ned was one of only six people in the whole of the Commonwealth to achieve Officer status before the age of 20. One of the others was the Duke of Edinburgh. There was a visual presentation of snippets and events of Ned’s life, including his schooldays at Grammar, where he excelled in the sporting field.
Ned has been a keen and committed member of the RSL, and Tet Grube spoke of the excellent work Ned has done for Legacy over the years. District Governor Peter Garnett read out a special and personal letter of congratulations from the World President of Rotary International. Later Lindsay Ford presented Ned with not one, but five Paul Harris Awards, one for each ten years of service. He pinned onto Ned’s lapel a badge with three rubies, to complement the five Paul Harris award badges that Ned already deservingly and proudly wears on his jacket. 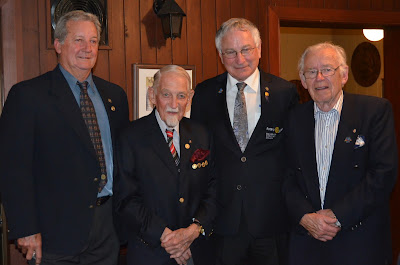 Posted by Mary on Norfolk Island at 5:41 pm

Hello Mary
Lovely that you came to visit my blog and leave a nice comment!
Interesting to read about Ned!
Just co-incidentally and sadly my husband, Jeff, is about to have surgery for prostate cancer in a week in Melbourne and I have booked some accommodation near the Royal Melbourne Hospital at www.fightcancer.org.au which is within 5 mins. walk to the hospital for me and this is one of 13 units which Rotary have established for cancer patients and their families to stay in whilst they are having treatment at the hopsital.
So am feeling very grateful to Rotary and the work they do.
Even blessed to have this accommodatin for 4 nights which will help immensly.
Hope life is going well for you too!
Suzy

Thank you Suzy. I must get back to blogging. Facebook kind of took over. All the best for your husband. Bernie and I are on a similar "journey" with the prostate cancer. Sometimes the anxiety scares off my creative "muse".