THE STORY OF FLETCHER CHRISTIAN

THE STORY OF FLETCHER CHRISTIAN 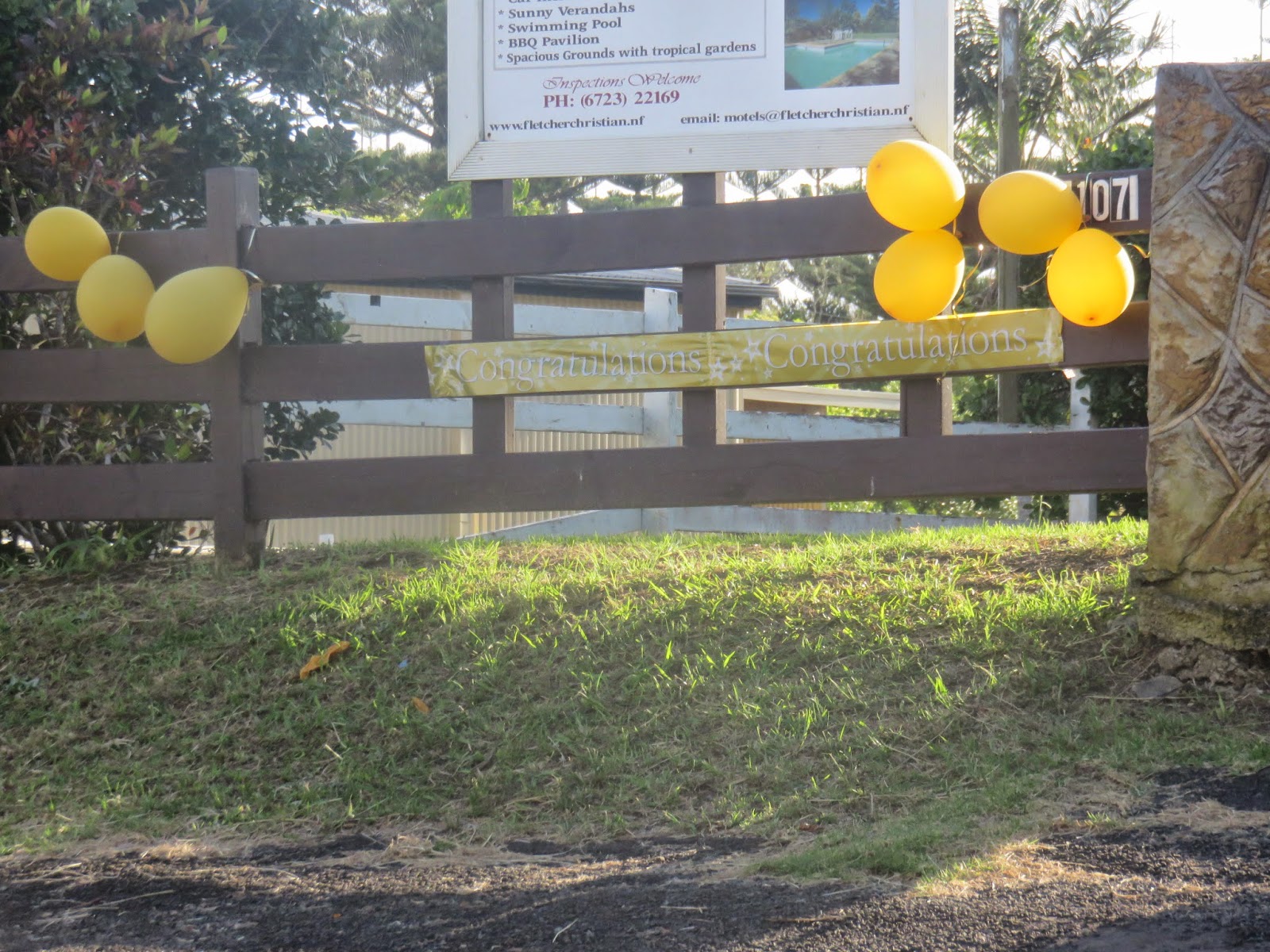 On Valentine's Day, Fletcher Christian Apartments reached a significant milestone, celebrating fifty years since the arrival of the first guests on February 14th, 1965.

Back in the early sixties, owner Bernie Christian-Bailey was working for Qantas in in the Sales department, and often took advantage of the cheap staff fares to travel home to for the weekend. He realised there was an opportunity to develop an enterprise that would cater for the needs of the modern traveller to the island. At that time, had a few guest houses and boarding houses and holiday cottages for long-term rental, many a little dated and tired.
An architect friend in Sydney, Dick Gailey, was commissioned to design a complex of self-catering units, to be built on just over 2 hectares of family land adjacent to the developing commercial district in Burnt Pine. The original plans show a series of blocks of units zig-zagging back down the hillside, with a small complex of boutique shops on the street frontage. Bernie wanted the development to be in an island colonial style, using local materials as far as possible, in order to blend in with environment. It was a pleasant block of land, sloping down to the Cascade Creek, and up the opposite hillside to butt on to Marie Bailey’s property. A fine well was sunk in the valley, and later another very successful bore was sunk on the level area closer to the road.
Early in 1964, work commenced on the first block of four units. Bernie's dad George Bailey took charge of the project, and his team of Norfolkers went about their task with great energy and enthusiasm. People like Charlie Evans and Moray Anderson helped on the job, and it was Moray who skilfully produced the shingles to roof the original building.
Meanwhile, there was landscaping to be undertaken, and it was Bernie's Aunt Edie Randall, who first planted the row of hibiscus along the street frontage, as well as many other trees and shrubs that are still there today. 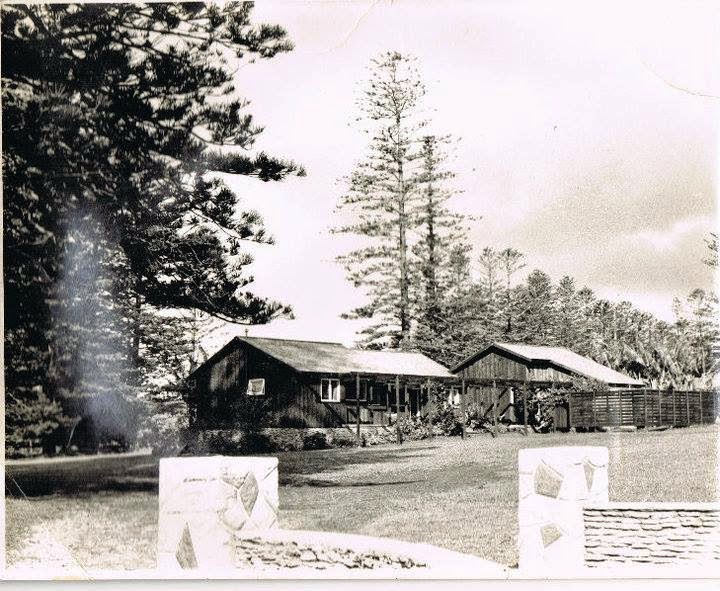 The first block of units

Karenne Gatehouse recalls that as a young girl, she and her Dad Kik had been out on horseback, and Kik suggested they let their curiosity get the better of them, and call in to see what was going on in Bernie’s new project. Karenne recalls her Dad being somewhat in awe of all the modern streamlined touches and finishes.
Ideas for a name were tossed around, and it was a colleague in Qantas who suggested "Fletcher Christian," a name which would not only reflect Bernie's family heritage, but would give the venture a unique and distinct brand.
Eventually the name appeared on the walls each side of the new cattle stop, this task being carried out by Mr Scotty Neagle, a very artistic gentleman who lived on for many years. 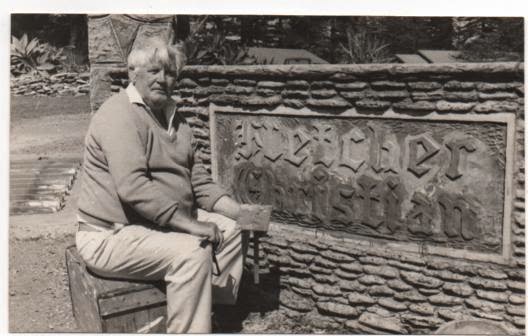 Bernie had begun to promote the Apartments through Mrs Aileen Dickson, who ran the Norfolk Island Booking Centre in Sydney, one of her assistants being Joe Adams! However, as it turned out, the very first guests were people who had been staying at the Kingfisher Hotel at , and wanted to move closer to town, people with the rather unsurprising name of Smith!
In many ways, it was a courageous venture, and a number of friends and family thought Bernie was taking a big risk. However he knew from experience that Qantas was actively promoting the market at that time, and that modern travellers were looking for upmarket and self-contained accommodation that offered more convenience, independence and flexibility. Bernie also relied on the fact that even if the "tourist boom" proved short lived, his central location would also be attractive for the traditional visitor coming for a longer term stay.
The prices that were being charged also raised a few eyebrows. The tariff in 1965 was 17 pounds and ten shillings ($35.00)per week!! And you even had to provide your own food!
As it turned out, many of Bernie's guests in those early years were fellow Qantas staff, taking advantage of the cheap staff travel fares, and the discount that Bernie offered. 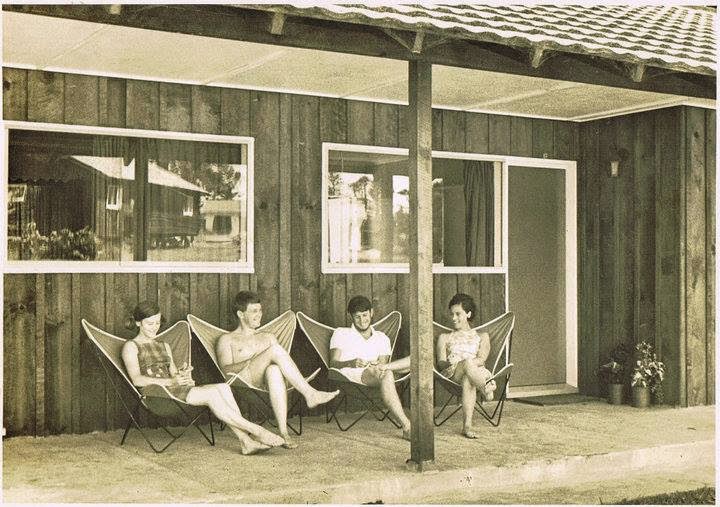 Guests in the sixties 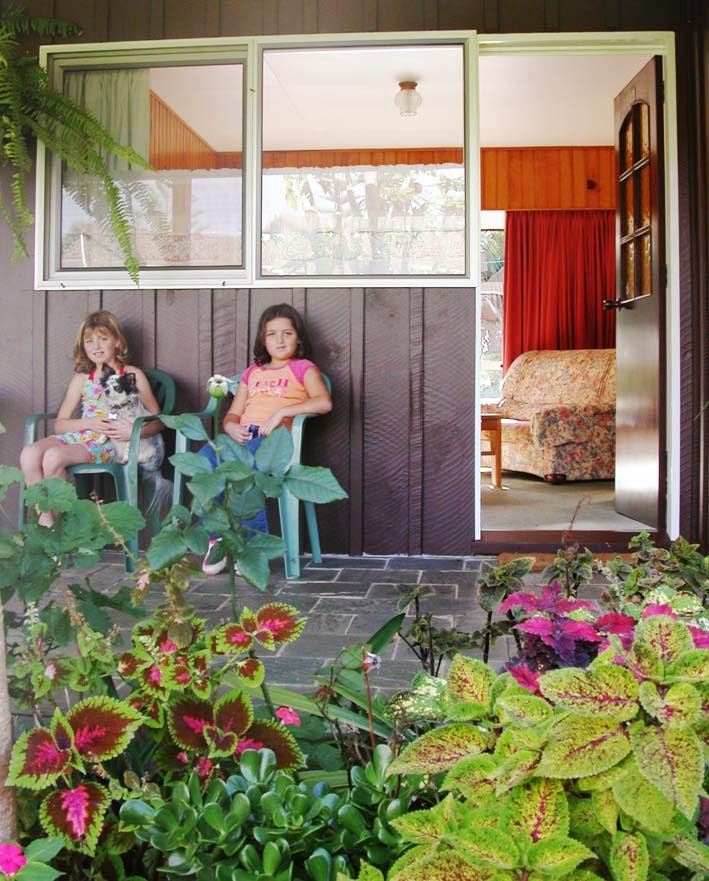 Grandchildren Sarah(with Digby) and Emily in the same spot

In those early years, there were also a handful of longer-term occupants in the units, including an American lady Mrs Barbara Gandy, and Mrs Sally Kadesh, who eventually restored and lived in no 6 Quality Row.
Until Bernie returned to the island to live in 1967, the units were managed by his cousin Mrs Marie (Leo) McCoy. When he came back here to live, he at first worked for Burns Philp. As the business grew, he took over full-time management of the apartments.
In 1968, the second block of 4 units was built, George Bailey taking charge once again. Then in late 1970, a third block was completed alongside the RSL fence, this time constructed by Borry Evans and his team, using a New Zealand pre-cut kit, but still clad in Norfolk Island pine.
It was around this time that Bernie and Mary were married, and moved into one of the end units that had a connecting door to the new office and transit lounge. It was while they were there that the children began to arrive, and it was necessary to rent elsewhere to accommodate the growing family. 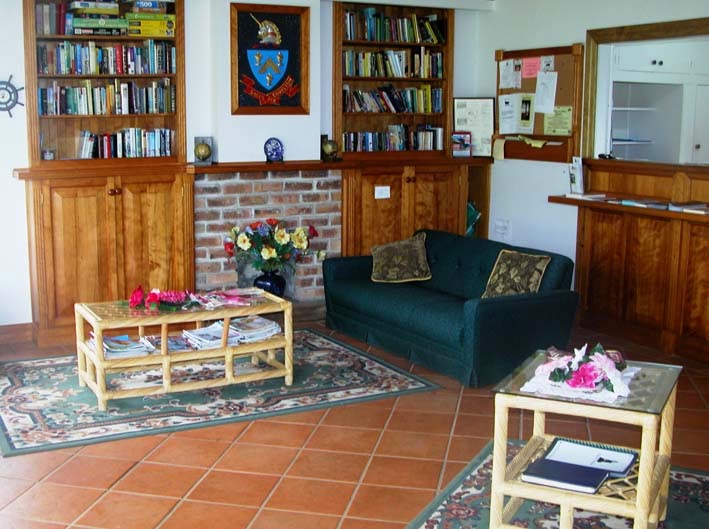 The Transit Lounge/Office, with the Christian Coat of Arms above the fireplace

In 1974, Bernie and Mary built their house in the grounds. It was designed so that it could easily be turned into two two-bedroom units. As the family grew, it was extended at the rear. For the next 22 years it was to be home for the Christian-Bailey family, including the 5 children , Charles, John, Peter and Edward. The children remember always being conscious of needing to consider "the guests" if they were being noisy and boisterous. But there were advantages, because it meant that Mum and Dad were always close to home. Great friendships were formed with some of the guests who came to stay regularly.
When the swimming pool was built around 1988, it added a great new dimension to a holiday at Fletcher Christian. Sadly, around the same time, the two old pines at the entrance, which were something of an iconic landmark, had to be removed.
For many years, a very picturesque flock of white fantail pigeons were a feature of the grounds and garden at Fletcher Christian. 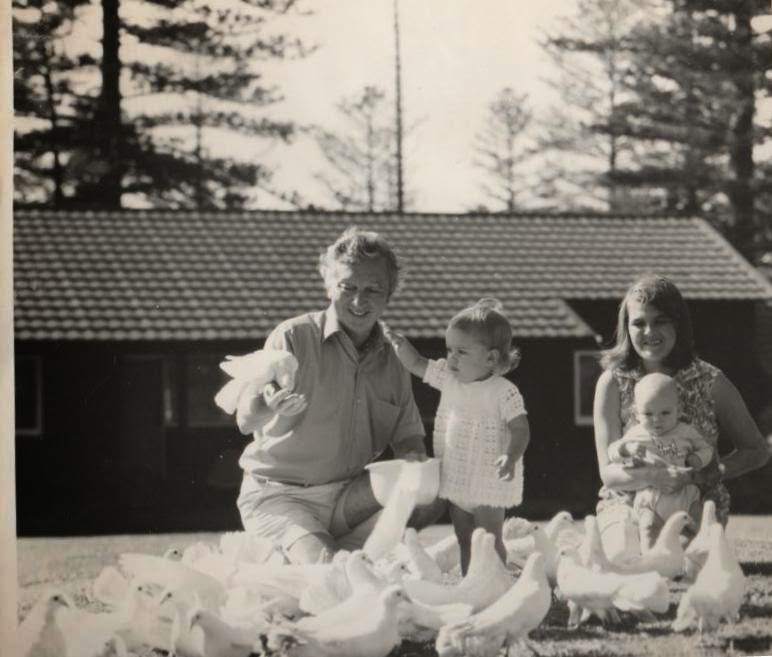 Later there were some peacocks who were much admired as they strutted around, but were not really appreciated for their noisy calling at night during the breeding season, or when they set off down the street early in the morning to see their reflections in the shop windows, leaving their rather messy calling cards.
There have been incidents over the years, like the times when guests tried to turn on taps for washing up when there was a power failure and the pumps weren’t working. They would forget to turn them off, and the units would flood. One of our funniest recollections is of the lady who asked about the green residue that formed in the basin and shower. We explained this was caused by minerals in the well water that flowed through the copper hot water pipes reacting with soap (a common problem on .) So she deliberately tested it out on her peroxide blonde hair!
In the days when palm seed fetched a premium price, Bernie and Mary established a large palm plantation on the land behind the units. Of course, the bottom dropped out of that market, and four years ago they applied to the Toon Buffett Trust for a grant to establish native vegetation in the area. Son Peter, who looks after the grounds, was employed on this project, and the new plantings are doing really well.
It is wonderful to look back through the registers and visitor's books and see the names of the thousands who have stayed at Fletcher Christian over the years. They have included a number of well-known figures looking for some quiet privacy and rest. There have been some real characters too. Mostly our guests have appreciated the good hospitality and personal service, as well as the very convenient location. 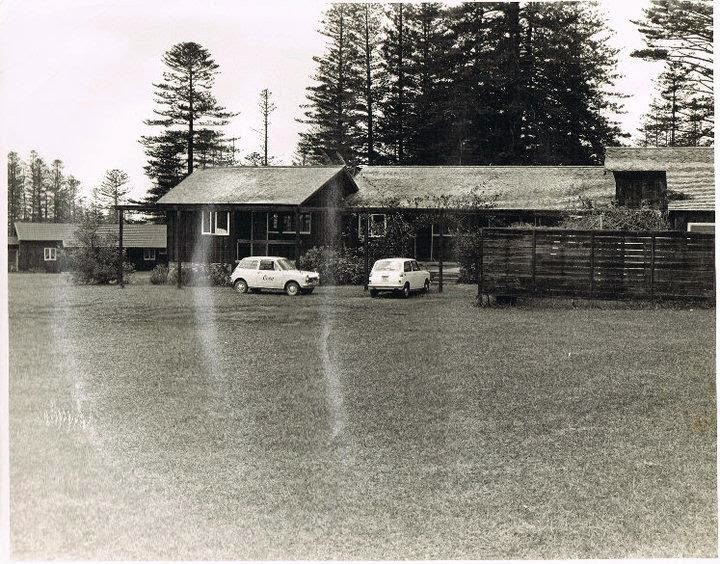 Another view of the early years. Remember Cec’s hire cars?

Running holiday apartments is a bit like painting the . You never have a break from upgrading, replacing, renovating, and meeting the everchanging expectations of tourists and grading systems. International phone calls and the internet have brought enormous changes, and it is a far cry from the early days when Mervyn Buffett delivered cables on his motorbike, or bookings arrived by letter, requiring the time consuming process of a formal written reply.
So many people have worked for us over the years, in the office, the housekeeping and the grounds.  There are also many of the island's tradesman who have shown enormous loyalty and service in helping keep the maintenance up to scratch, and have been willing to come at very short notice to attend to things like plumbing and electrical problems. There are too many to name, and many have passed on. But if you are one of them, thank you for your part in making Fletcher Christian a great place to stay! 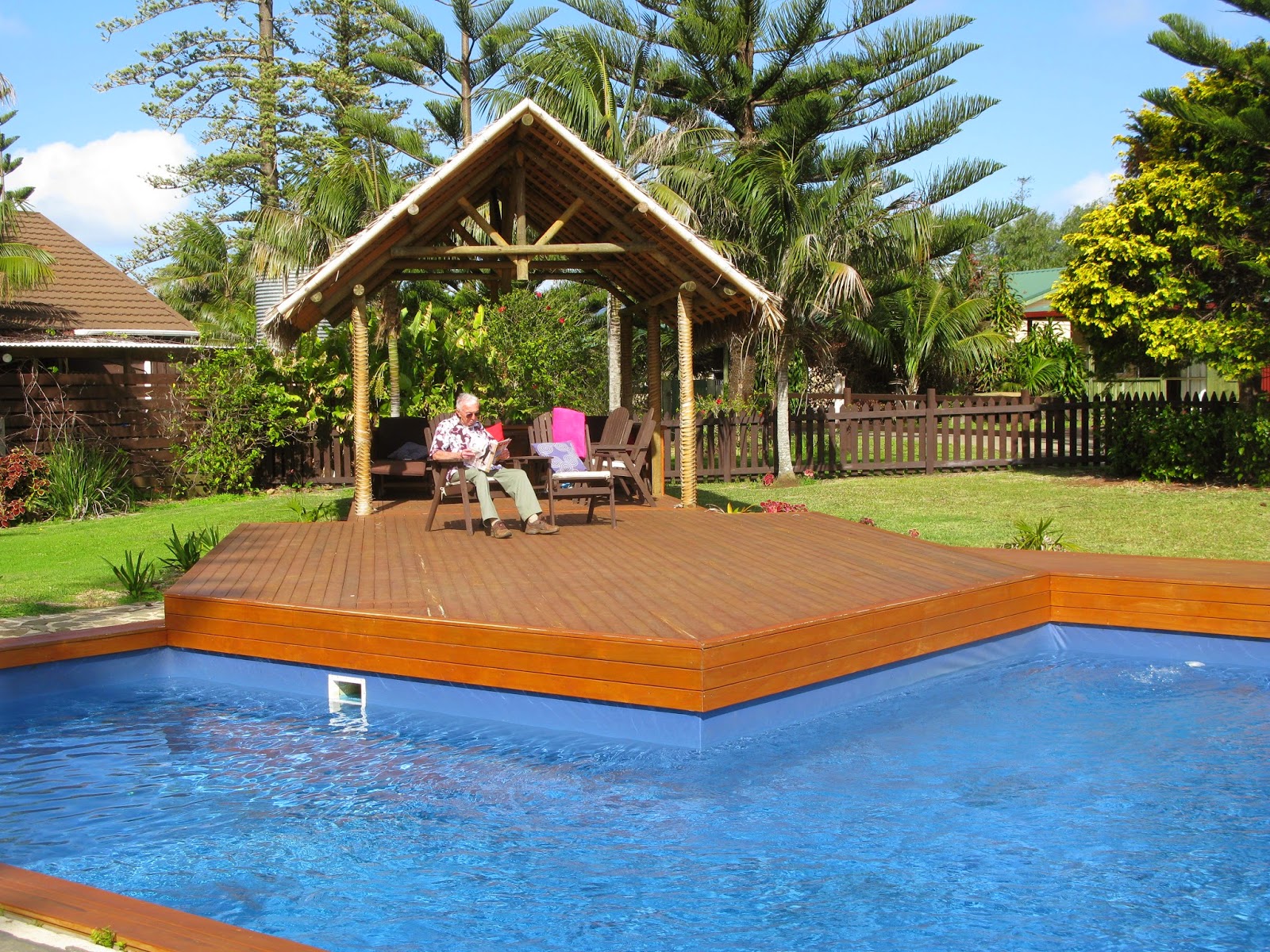 In 1996, Bernie decided to "retire" from active management, and he and Mary moved to the family home at "" up the road. Part of their former house became a Manager's flat, while the rest became a new tourist unit. It is hard to believe that was nearly 19 years ago, because Bernie is still very much involved. Not a day goes by that he does not call at least once, often several times, to check on things, chat with staff or guests, and generally make sure that everything is running smoothly.
As daughter says, Fletcher Christian" is still Bernie's "baby". He really has been in it for the long haul. His faith and investment in , made all those years ago, is still very important to him. There have been many hurdles and difficulties, especially in recent times, but it has been extremely satisfying and rewarding to be part of the visitor experience on Norfolk Island, and help promote as a wonderful destination. 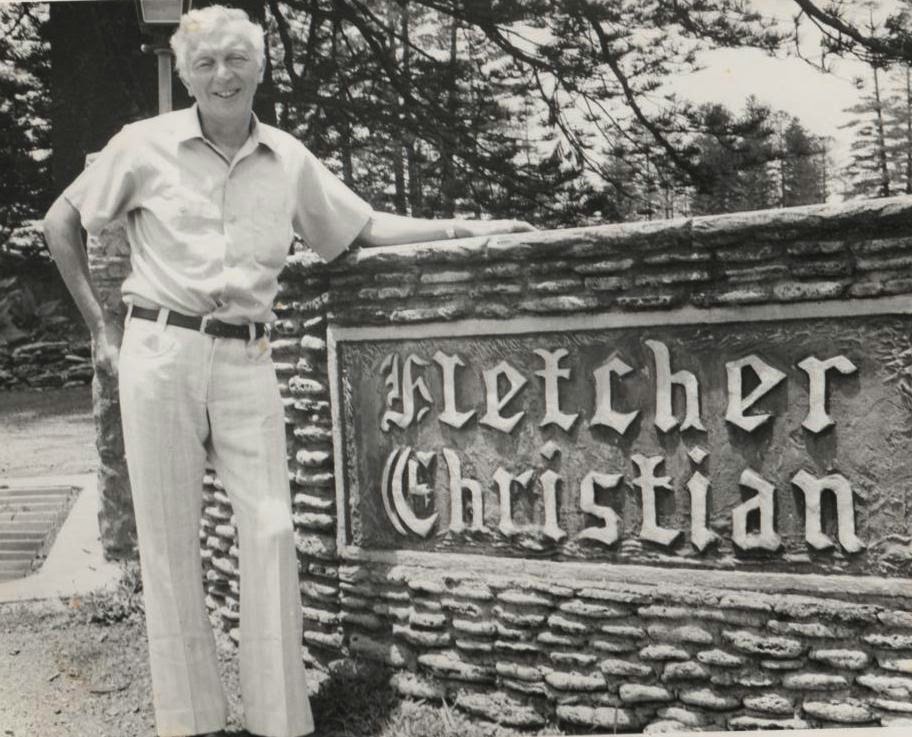 Posted by Mary on Norfolk Island at 10:28 pm